The aim is Colorado with ambitions for Denver.  We take an $18 stop at an Air BnB, Oklahoma to step out of Texas just ‘cus. Our hire car runs and rattles down pigtracks, spitting out clouds of dust and kicking out a red mist right behind us. My mind plays out North by Northwest and X-Files movie drive scenes and I have to remember not to have too much fun. There’s a deposit on this thing to think of.

We skid round at right angles, tear down the straights, Holy Fuck give a perfect glitch-drone electroclash soundtrack to match with the light and the scene. Cars in the distance are now noticed only by their own arrowed clouds, their rides at the tip of the dart. We emerge from the track on something like a road that leads to nothing like a town… a survivalist guide to dystopian futures, One Man and His Dog pitched it nicely. That film seared my brain at too early an age.

The gas station here must have ran out of gas sometime in the last decade, a Coca-Cola sign sticks in a chipped paint stained swathe to the last house in town, or first pending which way you enter. It’s early evening near dusk and the one street is empty. Not a single light shines through the ‘back soon’s and no mores, I guess ‘soon’ left town and by the count of the churches, most business around here is praying.

We’d been told by our host that church going here was heavy, when we pulled up and were greeted by freshly preached pre-teens in church slogan clothing, we guessed we might have to tone down.

Our room was an outhouse, not as bad as that sounds, in part of a network of quickly made leisure rooms that were made for the children that circle the homes. It’s a one man led mission to entertain at all costs; A swimming pool more bugs than water, discounted soda and candy machines, restored pinball tables from 60s and 70s, a fake one armed bandit that spat plastic coins and a school bus parked out on the lawn. Village of the Damned and The Twilight Zone has nothing on the tribe of white hair and milk teeth dressed in God Loves Me T-shirts that swirled around our accents and asked of the Queen. We drink iced PG Tips with our ex-New York host and he’s proud of the grounds that he keeps.

We stay one night as planned. I lose a few quarters to the geriatric pinball’s ancient arthritic flippers and we lock up the door to get sleep.

It occurs some weeks later I saw no other adult than our host in this stint; it’s taken some time to put words to this place.

A morning dawn walk took me through brush and trail around ramshackle houses and once-were-home trailers, America’s promise never made it this far. Grain factories hum some miles to the east with a giant slaughterhouse to the west. I guess this is the rest, nestled down in between. The sun feels at home in its own broken light. 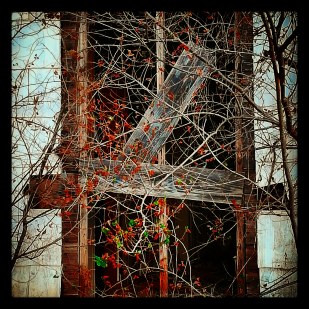 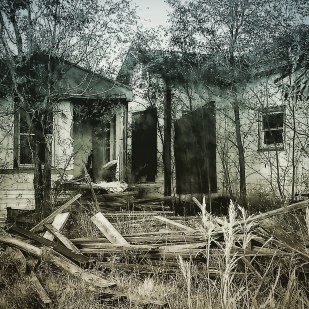 Back at basecamp I’m asked if I’d mind a small job, there’s a hole in the pool that needs fixing and I’ve not been useful for weeks. The pool is a polythene tub stood on stilts, there’s a blue lining worn from transport from New York plus a little neglect and irregular use.

Ever tried fixing a pool under water with a glue gun and flap of new skin? Trying to keep my face closed to a slick of dead bugs while I sink long enough to apply flap and glue is a thing I don’t want to repeat.

Eagles attack while I surface for air, claws and beaks pitch for my scalp. I’m covered in watertight polythene sealant that clings to my skin like white churro shaped leaches and I can’t keep my breath long enough to get done. He asks if I want him to step on my head so I don’t keep on floating back up. You could say I politely declined.

I’m replaced by a brick and a breeze-block or two and I sluice off the glue with a rag and old turps, turps so old it has its own puree; A petrol emotion of fromage-style sludge and a decades old thin slip of stripper.

In a moment I’m red and I’m raw. I’m washed and we’re gone and we’re headed away, $18 refunded for trouble. Colorado, we’re coming your way.