“What comes is a stampede of blues, of dirtbomb dry tracks made of squalor and howl where quiet is a hard thing to find…”

Whisky Stain are a snaked link of twos; opposing features, mismatched mirror images, right down to the duo on stage. Recorded they lean towards a spit-shine production but live they come bloody and raw. Callous grinds get expelled from a single guitar or beat out of a chewed gurning bass. Underpinning and beating come blunt trauma drums that launch remorseless acts of aggression.

As if these sets of two aint enough… In spite of their bible-belt barrel-crud core, with its lawless and timeless in rock and roll subjects (hard living, hard heart-ache, Lord loving, gun country, self introspection and sorrow), between songs it’s light humour and charm. I’m almost disarmed when they chuckle and speak so politely to give thanks and love.

And I’m glad the slick’s cast off for stage. Here’s where they live like a dig to the abdomen; muscular, forceful and bruising. Luke Grainger’s crunch buckle snares, Rob Lavington’s twinned pitched guitars, it’s good just to see something ignite.

So we’re here for their latest release. Human Touch is sent out to the world. The song is a delta bound dive that moves sketches to groove through to ugly. It’s arrival is third in the set, by which time we’ve been more than acquainted. Cymbals have been slashed and sweat beads have been shed, and everything’s punished and wrought.

For the single we clamber on stage, we switch views and turn heads to the back. On the wall Human Touch‘s new video plays, we applaud and trade places again. Might this have been better as intro? Did it carve up the set a slight early? Any clunkyness goes soon as we reconvene and we’re back in to where we left off.

And what comes is a stampede of blues, of dirtbomb dry tracks made of squalor and howl where quiet is a hard thing to find. But when space and quiet come they’re essential; a breakdown to vocals, an overhung gap, a space between beats where a phrase is repeated ’til syllables track themselves back. These all act as hints of release. And it’s practice that placed these release points. Whisky Stain have played long and often enough to know when to ease pressure or push. Toy with your audience, incite and leave hanging, come back blistered anger and blast.

Their faithful move free and stomp quick, they chant back the words to the duo. Rob pairs his overstretched vowels and dragged Rs with an earned gravel-rasp and pinched squeals. Subjects aside, these are songs made to play with. You can dance to old-country redemption. Repetitions of phrases, they pinpoint a feel and they snag at the back of your conscience. Even Luke knows when not to be fussy, the red-needle thump of a straight four to floor can be all a part needs to slam home.

I’m too busy writing and sketching to take note (still sketching instead of a camera) of track names in the mid section swell. But the last third plays out like a hit list, a playlist of singles to date. The Lords Revolver ramps up from its floor toms to end-world redemption and violence. It slices and lurches in fever and sway, there’s rust coloured sludge on a blade. Twice The Same grinds that redemption, right down into particles smaller than sand. It’s like BRMC are distilled and refined to their once bare essentials with their later-life bloat stripped away.

Denial follows suit with a skewed jagged rip. Less uniform rhythms get gnawed at and frayed and there’s clearly a sweet kick on stage. That earned rasp is gasping, it’s frantic and sore, they’re psyched out and locked in and let loose. Forgive the cartoonish American romance for God’s cowboy justice and love, you’re better off taking the force of the blow as it’s lavishly dished out and dealt. I might wish for descriptions less genre entrenched but I suspect that’s my own distraction. 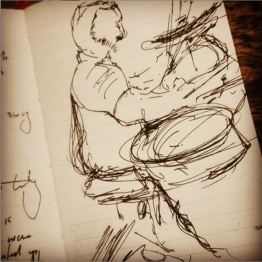 I’m glad I got asked to the show. I’d been shying away from writing for the band as it’s made out of people I’ve grown with… a wrong word or hard truth might do damage. Lucky for me there aint much bad to say and the stage is where they wash up best.

Whisky Stain played Rough Trade on 10.05.19, on the day their new single was launched.
Find that single here with more music and info.

Want to hear featured artists and tracks?
Listen to Rats on the Run Radio

Help Support Rats On The Run

It takes time, love and passion to keep listening, writing and reviewing your music. To keep this site ad-free, to help us keep pushing, all and any donations are more than warmly welcomed.