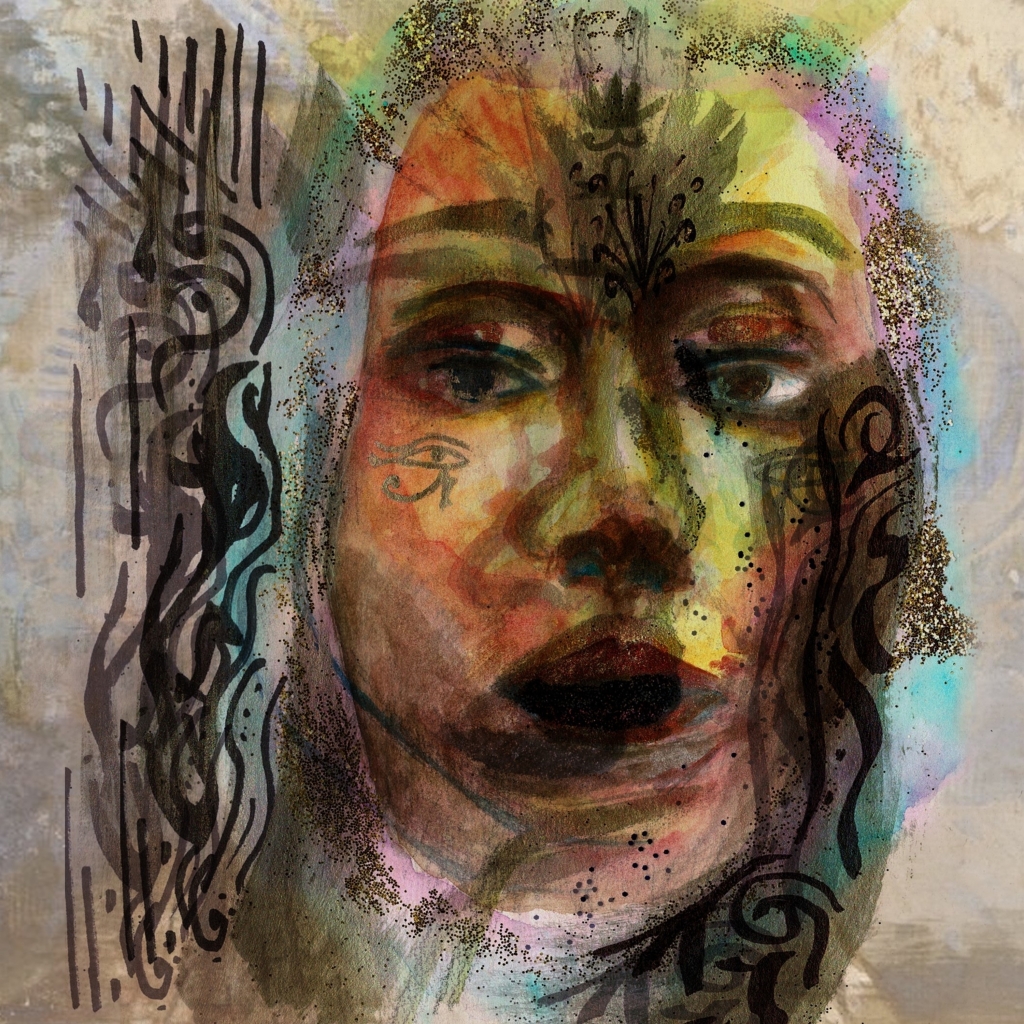 “Here, for a moment, for the length of an album, the rule of imagination is king and anything might just be possible. Beauty and brutal included.”

So how do I address or attack this? Something so free from restraints and constrictions, something so drenched in a beautiful chaos, so outside the realms of the loves that I’ve studied that I have no comparisons to hand… It’s the sound of loose pictures and dreams on a string, it’s the sharp shades of fight, of cause and desire. It’s the sound of the power to make good the bad and the mean and the nasty simply by willing it better. If enough people think it and want it, it sticks. Or so we try hard to believe.

More than that, it’s a palette of colour and tone that you sense gets remixed with each listen.

I can draw from the hues of easy jazz overtures to black and white neo-noir movies, where street lights and raincoats beat down on wet concrete and saxes and hushed drums play in amber. I can pull at the loose threads of sharp edged guitars that ride without care through a tangle of notes to unravel a nervy discordance. I could pick at the words and their lost optimism; the power of dreams and the power of the dreamer, all sung like a washed and hung mantra that’s clung to so tightly it’s strangled.

I could try to keep focus on any of these but I keep being distracted, refocused, as if the sands beneath me shift and sway and I’m swept in a different direction. Because all this exists in one song, shining like layers of washed slate. I admit that I’m nervous, it’s so loose stacked and dense, that I might not have the know-how to take it all in.

From the opening moments of ‘Song That He Wrote‘, I expect that lush-smooth to continue. Moments later I’m lifted, embraced and emboldened, pushed towards the sky on a whirlwind of sounds caught between seas and warm air. Pianos, synths, strings, double bass, brass, they collide in a new-world explosion before falling back down to the water. Jelly’s layered vocals lend a backing of felt against tablas that fold themselves in, I learn quickly not to expect.

We career through eastern tribal, free form jazz, depression, oppression, internal reflections, spirituality, punk and celebration and praise for the human potential. The optimism of love as a unifying thing rarely sounded so un-forced or stayed. Jelly calls out our place in the world and the wonder that we can bring to it, just as much as the wonder and freedoms we strip – especially from those who most need it.

There’s violence and protest here too. ‘Ego‘ lurches between an Avalanches signature nu-soul jubilance and crushing post rock intersections. Just as soon as sat happy in a soft fluid groove I get wrenched into brass enforced blast. The dangers of letting your ego take hold and prevent you from joining the world, they’re laid out as warnings for all. “Create the change, not just take orders / Give ourselves up to one-another / And so it must be so / But you can’t let go of your ego” and Blam! That anger and danger takes over.

And should we need a reason for anger, or justification for change, the last two tracks together provide not just a reason but a need for a most basic empathy. Focus shifts to Yarl’s Wood, a UK immigrant detention centre called out for its treatment of those who need love most.

The first, ‘Renny’s Poem’, is unbroken spoken word heartbreak; faith, love and soul ripped away by walls and a concrete captivity. All the colours of The Dream Jazz Manifesto are gone, all the freedom is taken away. A simple and barely accompanied voice speaks directly to you straight and clean.

Jelly knows that a prison makes a human an animal, what and wherever that prison may be. And here we’re begged to feel not for but with the detainees inside Yarl’s Wood. Renny’s word’s compel and capture. She’s less than an animal; nothing.

It’s almost impossible not to be struck, not to bleed in time with the speaker. But as throughout this album, as shown off again and again, we don’t head for where we’d assume. There’s no pitch for sympathy, we don’t head for sorrow, we head for the last track; resistance.

For the first time Jelly’s vocals are treated; her so-far faultless restraint is replaced by distortion and un-sanded touches. A call of defiance to break prison walls precedes a headgiddy mix… Heavy on thick groove and funk, steeped in a nu-soul solution, a punk take on showtunes and sly nods to The Beatles’ ‘Come Together’ riff all spin on the edge of a dime.

It’s an outlandish finish from an album that pushes and sways and routinely challenges. A tough listen sometimes, admitted, as with all things that run without boundaries. There are parts of songs where I might not click in, where I’m glad the next section will spin new directions. But here, for a moment, for the length of an album, the rule of imagination is king and anything might just be possible. Beauty and brutal included.

The Dream Manfesto is available now, on Spotify and Jellycleaver.com.

Find my picks of these tracks and other featured artists right here on Rats On Run Radio.

A brand new collection of promoters and journalists, each submission gets sent to all blogs.