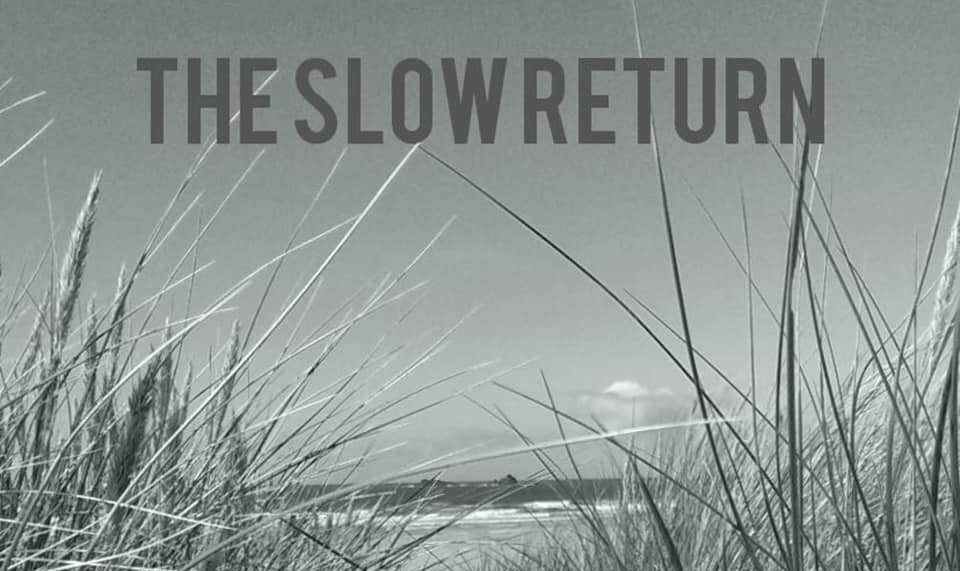 Like the best of that West Coast collective that never fades out of the cool indie vogue, that lazy sound’s just an entrapment…

There’s no urgency here in the haze, we’re on soft cushioned floors that rise up to the winds on a thermal and theremin lift. There’s fractures of coloured reflections, a gist of a tune in the making. Organic sounds start to twist and expand and take turns to turn in on themselves. This unwind and tighten keeps focus, never too tight to strangle or so loose to unravel, there’s a tug/pull of snapped undercurrents.

This is the lead track of Slow Return’s single, a twinset of A-sides in one. Where ‘Imaginary Lions’ lies deep in the imprint of transcendental choral-warped pop, as set by the loosest of Beach Boys, the softest of Electric Prunes and the most joyous of The Flaming Lips, the next track steps up and steps back.

‘Crippled By Kindness’ reins in on the free form, it drags itself out of the swirls. Instead of a sprawl we get gently gnarled rhythms, straightened and sweetened by indie production. The drones are way back in the mix, the drums move through unfussed and slushed, everything points towards a West Coast infection of jangle drenched over-heat ease.

And yet while this all sounds a stark contrast, these two tracks they sit tightly knit. The same instrumentation of organs and theremins run behind the cut-strummed guitars. The feedback that cast out its back weighted groove and wheezed on ‘Imaginary Lions’, gets restrained to an overhung knuckled down choke. The same goes for the textures of vocals; the reverb and reverse of the first track is stripped yet they retain their place and position; clearer with fluidic cheer.

I wasn’t expecting that three minutes in I’d be tracing lines from Yuck to Pavement. And Just like the best of that West Coast collective that never fades out of the cool indie vogue, that lazy sound’s just an entrapment. That heat-city-beach breeze might give off a warm buzz but there’s usually introspection beneath. “Sometimes I wonder why my brain is in my head / It might well be dead for all the good it does in there” would be self serving putty in another genre’s hands. But in here, in this sandy-glow clatter, its naval gaze weight has been lifted and shifted so it’s heard self effacing and light.

There’s an album on way, and it’s due out next month. And like I can’t help but listen to these songs in order, as an intro from one to another, I can’t help hoping (expecting) these two tracks act the same for the 23 track LP coming.


The Slow Return’s double A-side ‘Imaginary Lions / Crippled By Kindness’ is out now.
It’s available to stream and download. Watch on YouTube and find them on Facebook.